No Fault auto insurance “reform”–3 years later, and Michigan drivers are not getting what they were promised 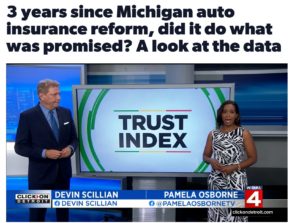 <snip> Years ago, Wendy’s had a television commercial. A wonderfully ironic grandmother by the name of Clara Peller would exclaim at the top of her lungs “Where’s the Beef?” In looking back on the 2019 Senate Bill 1, we are left asking something similar.

To steal a line from the Governor Whitmer, where’s the damn beef? When she signed the no-fault reform bill on a sunshiny Mackinac Island May afternoon, a smiling crowd of Democrats and Republican proudly congratulated themselves. No-fault change had been elusive for more than two generations. In this “reform,” they proclaimed, we Michigan drivers would get massive cost savings. They led us believe our highest-in-the-nation auto insurance premiums were a thing of the past.

So, we saw marginal savings at best.

Continued here, with a video: https://tinyurl.com/NoFaultReformFailure