Traffic deaths have actually INCREASED during the pandemic

Fewer cars on the road has not led to fewer car crashes, as one might expect. It seems that bad drivers are determined to drive badly and cause crashes no matter how many cars are on the road with them! Be sure to protect yourself from bad drivers by making sure you have good bodily injury insurance limits, including Uninsured and Underinsured Motorist coverages. See our other articles and videos on this web site for more details.

Traffic deaths rose 8% in 2020, even as Americans drove fewer miles during pandemic

DETROIT – Pandemic lockdowns and stay-at-home orders kept many drivers off U.S. roads and highways last year. But those who did venture out found open lanes that only invited reckless driving, leading to a sharp increase in traffic-crash deaths across the country.

The nonprofit National Safety Council estimates in a report issued Thursday that 42,060 people died in vehicle crashes in 2020, an 8% increase over 2019 and the first jump in four years.

Plus, the fatality rate per 100 million miles driven spiked 24%, the largest annual percentage increase since the council began collecting data in 1923.

And even though traffic is now getting close to pre-coronavirus levels, the bad behavior on the roads is continuing, authorities say.

“It’s kind of terrifying what we’re seeing on our roads,” said Michael Hanson, director of the Minnesota Public Safety Department’s Office of Traffic Safety. “We’re seeing a huge increase in the amount of risk-taking behavior.” 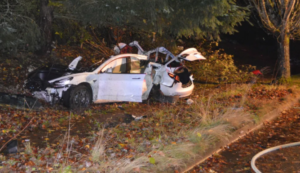 Last year’s deaths were the most since 2007 when 43,945 people were killed in vehicle crashes. In addition, the safety council estimates that 4.8 million people were injured in crashes last year.

“Almost immediately the fatality rate started to go up, and go up significantly,” Hanson said, adding that his counterparts in other states saw similar increases. “It created less congestion and a lot more lane space for divers to use, and quite honestly, to abuse out there.”

In late March and early April, the number of speed-related fatalities more than doubled over the same period in 2019 in the state, Hanson said. Last year, Minnesota recorded 395 traffic deaths, up nearly 9% from 364 in 2019.

Drivers also used empty roads to drive at extreme speeds. In 2019, the Minnesota State Patrol’s 600 troopers handed out tickets to just over 500 drivers for going over 100 mph. That number rose to 1,068 in 2020, Hanson said.

The high number of speeding drivers is continuing even as traffic is starting to return to normal levels, according to Hanson.

The safety council is calling for equitable enforcement of traffic laws, infrastructure improvements, mandatory ignition switch locks for convicted drunken drivers, reducing speed limits to match roadway designs, and laws banning cellphone use while driving, among other recommendations to stem the deaths.

The council collects fatal crash data from states on public and private roads. The numbers released on Thursday are preliminary, but every year are only slightly different from the final numbers, Kolosh said.